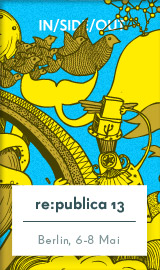 First day of re:publica 2013 is over and I am just about to hit the second. But I wanted to share some impressions on the panels and presentations I attended first.

After a warm welcome by our hosts, I started with a panel on Open Data and Open Government. As I also support Open Access, I sympathize with the idea to give people who paid with their taxes for the gathering of governmental data access to the results. It's the people's administration, not the administration's people after all.

I was also happy to see Yoani Sánchez and hear about her experience of blogging in Cuba. I learned about the possibilities to blog and tweet without internet access (using Flash sticks and SMS) and my disdain for any totalitarian system and the use of censorship to enforce silence on people got a little refreshing.

Some people moved with me from Cuba to Iceland and from censorship to the attempt to built a truly democratic constitution (which failed). Icelandic MP Birgitta Jonsdottir shared her experience of being a "plug in" into the political system. Very energetic and very promising, I wish there were lots of EU politicians like her. Unfortunately Iceland is not (yet) part of our union.

Next came the Irish human rights activist Joe McNamee who criticized how big companies actually ignore or shape communication politics which is a deeply undemocratic process. Insightful. There is work to be done.

I was also particularly looking forward to hear Mozilla's Mitchell Baker and her ideas on how to build a web we can trust. And I was more than happy with her presentation - as I usually am with her companies tools and systems.

Last but not least I attended Richard Allen's discussion before taking a long overdue break and meeting fellow re:searchers @ re:publica. There was some final preaching by Mr. Lobo as well. I stayed out of it though.