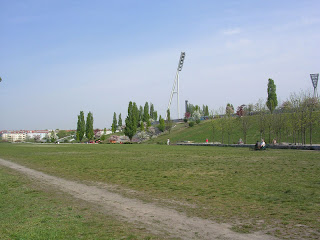 Sunny Sundays are for flea market, ice cream and relaxing inside this park (there are usually more people there, this is an old photo). It is the "Mauerpark" (translation "Wall Park") in the North-East of the City, a part named Prenzlauer Berg and I just happened to spend my last Sunday there. First as a flaneur and loving visitor of the market, later on dozing off on my blanket with a friend. Coming home, I felt just like arriving from about three weeks of holidays.

The park used to be the borderline between East and West, French and Sovjet part of Berlin - the "death strip" between the two Germanys. Nowadays we don't have any soldiers on patrol there anymore, well - except for those who want their spot at Walpurgis Night's bonfires that is.
But still, sometimes you can smell history there. The atmosphere in the old East is still somehow different from the West, and this leaves room for the assumption that some things will probably never change. Then again, maybe they don't have to ... .
Posted by ~SaS~ at 1:47 AM