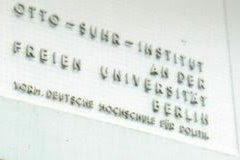 OSI club is running a lecture on politics and journalism in Berlin again this summer. I am attending, whenever I find some time on a Monday evening. Christian Walther managed to invite some of the key players in political communication, people who work for television, radio, political parties, the local and federal government, newspapers and universities. The background noise which is wafting through Berlin's air is getting a single voice each week. Most important, it is getting responsible again, as every speaker is giving responses to our questions in the end. The mass communication machine consists of eleven faces this term, some of them already crossed my path before. Apart from seeing former teachers again, I also just saw the chief editor of my early morning newspaper yesterday. It is the one and only serious counter-public sphere paper that managed to enter the boxing ring of Berlin's established press and stay there for about thirty years now. The woman at the top of the flat hierarchy the others learned to accept in time told her audience why and how this has to be the way it is. To sum it up, taz is still necessary because it is still more provocative than every other middle of the road rightist or leftist mainstream paper and counterweight to the far right. Thus it is one important different perspective in the German public sphere, one that still values core journalistic ideals a little more than some others do - be they fulfilled or not. However, it was a good listen last night.
Posted by ~SaS~ at 12:13 AM