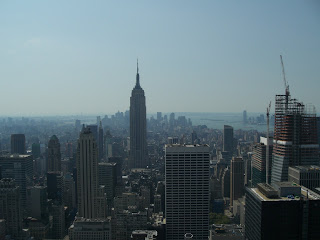 This is how a visitor may experience the city: The last drop which makes the cup overflow has fallen many years ago, and it now drops, and rains, and pours, to nourish the floods which inundate the landscape. It drops, it rains and it pours superfluous information. The galleries on Madison Avenue overflow with works of famous painters, and those in the Village with works of painters which try to become famous. In book stores like Barnes and Noble a flood of alphabetically ordered paper backs distributes at minimal costs the intellectual production of the recent past to would-be receivers who perambulate there like lost sheep. Innumerable shop windows display the newest and the oldest objects of Western civilisation, and of those civilisations which penetrate the West, in order to conquer it from within. At the universities, the laboratories and the foundations numerous well equipped researchers in the natural sciences and in the humanities compete with each other to open up ever new frontiers for knowledge and action. At the same time numerous museums suck in forgotten and half-forgotten knowledge and action from the past and from exotic regions and they pour all this into the present. Every available surface, like walls, cars and sidewalks, is being covered with "creative" writing and painting. In uncounted corners all over town one dances, photographs, films, videos, one makes poems and music, one "expresses" oneself. New religions sprout like mushrooms, and old ones are reborn. Every thinkable and unthinkable type of social and political "revolution" is being advocated. Nothing comparable has existed before, not even in Hellenistic Alexandria.

Now such a deluge of quantity and quality is of course a desparate thing to behold, because it shows the futility of every creative endevour. As if civilisation were to suffocate on itself, to become superfluous from within itself. But such a subsummation of the phenomenon New York under the heading "decline of the West" is not what is called for. Because New York and what it represents, (namely the West), is not only a devastating experience, but also a challenge. A challenge which demands of us that we change our attitude toward civilisation, and, most of all, that we change our attitude toward creative action. It demands that we re-evaluate our commitment to civilisation. And this is far from easy, because it involves to abandon certain very fundamental values, and the search for new ones.

What New York is about is the discrepancy between available information and the human capacity to digest information. The discrepancy between the Sunday New York Times and our capacity to read it. New York does not challenge us to try and write an article for the New York Times under the desparate hope that it be published, read, and mediated by New Yorkers. It challenges us to do what we can to decipher in a meaningful way the New York Times, the City of New York, and the whole Western civilisation. It challenges us, not to add some further information to those already available, but to try and give a meaning to the informations which inundate us. Which is to say: to discriminate among informations.

To use the language of cybernetics and informatics, those disciplines which characterize the present situation: New York challenges us, not to produce and to store information, but to process the data which are put at our disposal. New York is a concrete challenge to analyze and to manipulate memories, not to try and enrich them further. Not only those new types of memories like the ones which are in the computers, but equally more traditional types of memories, like books, museums, exhibitions, and our own brains. In other words: New York challenges us concretely to try to "remember" in a critical fashion.

This demands of us that we change in a radical way: that we invert our glance, and no longer look outward, but inward. That we no longer try and look beyond the horizons, in order to transcend them, but that we now look toward the center, in order to give a meaning to our past "conquests", (our experiences, knowledge, and action). That we no longer try to acquire, but now try to order in a meaningful way what we have acquired. That we no longer seek progress, but consolidation. It seems that we have dangerously progressed too far and too quickly in the recent past, and that we must now try and correct this fatal error of ours. But if we do this, we must abandon a whole set of traditional values. For instance: we can no longer accept that "newness" is necessarily better than "oldness". We must stop to be "modern". "Modern times" is over.

Curiously enough, we possess a model for such a radical change of our attitude toward ourselves and the world. Fur such an inversion of the will, which no longer wants to experience, but now wants to remember. The Socratic model. For Socrates, like for us, memory is the central problem, although for him this means something differentfrom what it means at present. and for Socrates, like for us, wisdom is the capacity to remember. This, in the last resort, the super-abundance of New York is a concrete reminder of the original meaning of "wisdom".

Vilém Flusser
essay from the 1960s
(found in the archives in Berlin whilst doing some research on telematic societies)
Posted by ~SaS~ at 12:03 AM