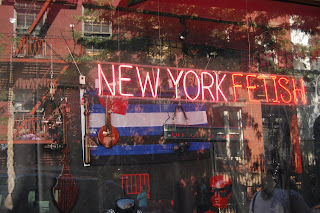 Almost every day I walk down Christopher Street to get back home. By now, I got pretty much used to the sight of all the colorful showcases, I am no longer touched by the pride that comes with the flaunting rainbow flags. Those symbols got a new connotation for me now.
The first weeks ( - after having realized that this is THE Christopher Street - ), whilst walking down West Village, those symbold made me think about the colorful and flashy parades in Berlin and Köln ( - I REFUSE to call it Cologne ... - ), about our gay mayor back in the °bigbadciddy° and the way his sexual preferences were discussed in public shortly after his official media coming-out, and about the "Siegessäule" - Berlin's gay citymag. It also made me think about some rather non-pc comments and jokes of my mates in England 05, young heterosexual males' general homophobia and things like that.
Christopher Street was at the center of New York's gay rights movement in the 1970s. It is in fact the site of the Stonewall Inn, the bar whose patrons started the 1969 Stonewall Riots that are now widely seen as the birth of the gay liberation movement. The Christopher Street Liberation Day Committee formed to commemorate the first anniversary of that event. The CSD was born.

Now, when I walk down the street towards the Hudson River, I have different thought's. When I see leather G-Strings, I meditate over having pasta/pesto or rice/ketchup for dinner, when I see male dummies in black fishnet catsuits, I worry about whether I have enough coffee for the next morning or not. Coming to the latter solution whilst passing another rainbow flag, I toss a coin to decide whether I spend my money on the brown gold in the Christopher Deli or in the "evil supermarket" in 666 Greenwhich Street. A new meaning is inherent in the symbols of gay pride. I wonder whether I will automatically worry about my caffeine supplies now all the time when I walk past a sexshop in Berlin. Classical conditioning? 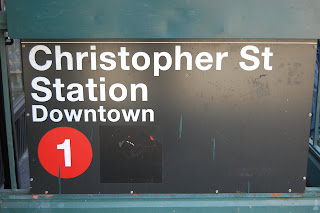 P. S.: According to a 21st century news source that is frequently used in America as well as in Europe, Theodor W. Adorno used to live here as well. If you feel like thanking him or punishing him for his "Dialectic of Enlightenment", just put some blooming flowers or pungent cacti outside 45 Christopher Street. I am sure someone will know ...
Posted by ~SaS~ at 3:04 PM

I did an oral presentation on the Stonewall Riots once.