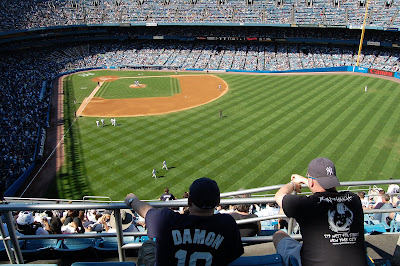 Bright sunlight. Nine players each. Approximately three hours. Bat-and-ball game. A pitcher throws a hard, fist-sized, leather-covered ball toward a batter on the opposing team. The batter attempts to hit the ball with a tapered cylindrical bat, made of wood. A team scores runs only when batting, by advancing its players - primarily via hits, walks, and the opposition team's fielding errors - counterclockwise past a series of three markers called bases and touching home plate arranged at the corners of a ninety-foot square. The game is structured around nine segments called innings. In each inning, both teams are given the opportunity to bat and score runs; a team's half-inning ends when three outs are recorded against that team. Baseball on the professional, amateur, and youth levels is popular in the Americas, parts of the Carribbean and East Asia. NOT in Europe. And there is reason for that: it is probably as boring as watching chimney fire or snooker on TV after coming home late at night. The audience has to be forced to clap by huge screens and audiotape applause. Nothing in comparison to a soccer game! But hey - at least they sell warm beer, hot pretzels and blue cotton candy in the stadium ...
Posted by ~SaS~ at 12:37 PM