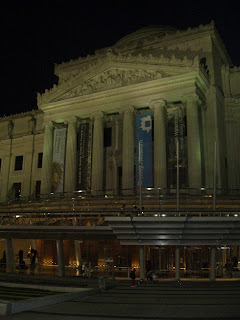 I just happened to end up in the Brooklyn Museum today.

That's just one possibility of what can happen to you when you grab your stuff after a nice and long breakfast, walk down a random street, get on a random train around noonish on a random but rather coolish Saturday in November, at some point in the 21st century.

I could have made this a planned trip. But, why bother? Fate works it out for you anyways.

In some respect, museums are like churches and future employees - you don't call them, they call you.

Time to finally see "The Dinner Party" in real, color and colorful.
Judy Chicago invited them all to gather around a huge triangular table (forty-eight feet on each side):

and in addition to these 39 ladies, no less than 999 other women who changed the world one way or another but who were written out of the historical record until recently. An impressive piece of modern art - I allowed myself more time to absorb than usual.

I also had the chance to audit the presentation of Mary Beth Edelson and gain some interesting insights into her work, and to get to know Janet Goldner as we both just happened to have a belated lunch and a book next to each other in the museum's café. A lucky encounter.