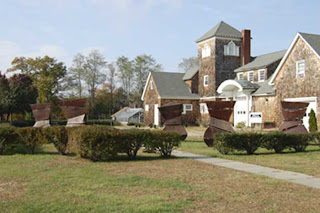 I told you about my final destination the other day - well, here we go:

I finally got to see Janet Goldner's sculptures in Islip.

They are situated in the yard of an old carriagehouse that is by now some kind of the arts center of the town. Of course, as almost everything else these days, it was closed down for the season. Which gave me as much time as I needed to walk around without any further distraction and the opportunity to examine the sculptures, take some pictures and notes, and another deep breath or two of the sweet Long Island air. 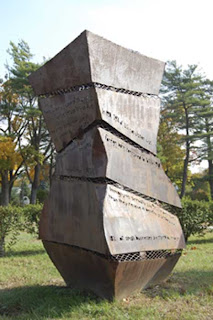 All sculptures are dealing with immigration to the United States. Some very impressive facts and quotes are carved out of the steel-templates.

I took some of those people's memories with me, some I would like to share with you, as Janet Goldner shared them with the people of Islip and their visitors - visitors like me who are here to find out a little bit more of what it means to be American.

Wanda Riviera, immigrated 1989, Puerto Rico:
"The said NY is beautiful, a lot of freedom. When I came here I felt freedom, then I was scared."

19th century Italian story:
"When I got here I found out three things: First, the streets weren't paved with gold;
Second, they weren't paved at all; and Third, I was expected to pave them."

Mary McCarthy to her family in Ireland, 1850:
"When you are coming do not be frightened, take courage and be determined and bold in your undertaking. As soon as you receive this letter write to me and tell me when you are to sail and the name of the ship as I will be uneasy until I get your answer."

Louise Nagy, immigrated 1903, Poland:
"Everyone lived in little cliques so they could help each other out. Maybe one knew a few more words than the other. They used to live 10, 12 people in one room because one was helping the other get established."

Rose Halpern, immigrated 1923, Russia:
"We paid him to take us across the border. About 50 people, we all paid him. My father carried my brother, he was 5, 6 years old. Carried him on his back. And we crossed, finally crossed the border in mud up to our knees."

Vernor Nicolls, immigrated 1915, Barbados:
"The first morning my father said 'I have something to show you.' We went to the window. He said 'This is snow. Open the window, touch it, hold it.' I remember very vividly that first experience."

Walter Wallace, immigrated 1923, Lithuania:
"It was kind of bad 'til we got to know people, speak the language and quit being called greenhorns." 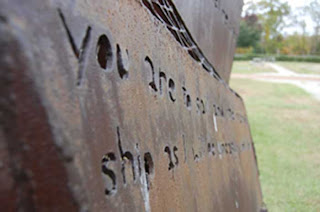 Carmen Ayala, immigrated 1958, Puerto Rico:
"The government accuses me of being lazy, but I want to work. I also want to learn more English. I don't know what to do if I can't find a job. I am thinking for the future of my family. I am thinking about the poor people and the old people. I am thinking what is going to happen to us."

Dr. David Ho, immigrated 1965, China, AIDS researcher who pioneered the use of drug "cocktails" to fight HIV:
"People get to this New World and they want to carve out their place in it. The result is dedication and a higher level of work ethic. You always retain a bit of an underdog mentality." 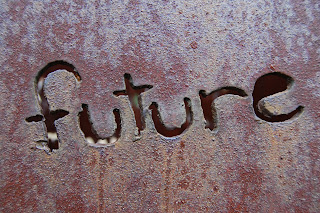 I strolled around the area for quite some time, trying to imagine how it would be for me to go on that one-way trip. I didn't come to a satisfying conclusion though. Then, on my way back to The City, I had a bagel and some creepy tasting juice-drink (Tropicana whatever, never again) at the sole café that is close to Islip station ("Bagels + More"). Some locals dropped by to have their take away lunch prepared. Bought the last package of vinegar crisps I initially intended to buy and then didn't, something I regretted when I was on that L.I.R.R. train again.

While I was sitting there eating my bagel with plastic cheese, the local radio station played Queen's "Bohemian Rhapsody" - and strangely enough it reminded me of home, 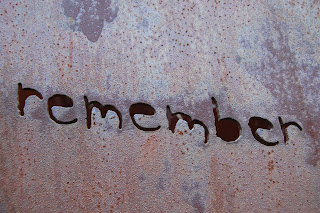