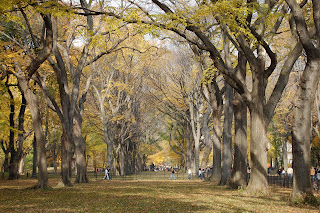 Damn, is it already the fourth Thursday of November?! I was thinking to myself last week, when everyone left The City to celebrate Thanksgiving with their friends and families. The American harvest season is over, people traditionally give thanks for the things that they have at the end of this season.

I am spending parts of the weekend at Vel's in Port Jefferson, escaping from the noise for a while. But on Thursday I went to visit some already familiar faces again, and enjoyed the colourful leaves of the trees in the park. 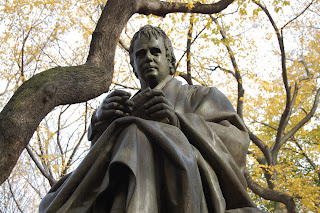 One of those faces is Sir Walter's (Scott, above). He is a Victorian bronze sculpture who took off his veil in 1880 - hanging out next to his fellow writer Robert Burns in Central Park ever since, rain or shine. Another familiarity is the saxophone player (below) who just tuned into another jazzy song upon my arrival. I guess he isn't standing there quiet as long as Sir Walter, but he didn't seem to be a newbie either. 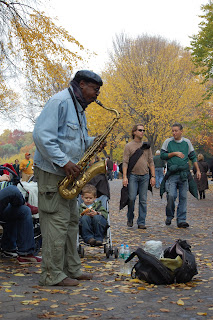 After listening for a while I did what I always do when I walk across the Park and what I came to appreciate: I got lost. Ended up circling around one of the lakes until I finally reached Columbus Square again, ready for my rather non-traditional but still nice Thanksgiving dinner. Want to know what it was?