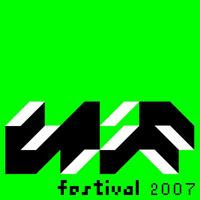 Cultivated nerdism reached Chelsea's Eyebeam Atelier this weekend: The Blipfestival celebrated international artists and performers who are well into chiptunes and 8bit music.

Celebrated what? Some of you might ask now. Well, for the ignoramus amongst us: There are several lads and ladies around who were nurtured by early video games, wasting away their spare time after school playing games on Ataris, commodore 64s, portlable Game Boys and early consoles. All games had particular soundeffects combined with their moveable visuals. Some of you might be able to recall the music coming out of rather crappy speakers of the machine involved while you or your children were playing yet another level of Asteroid, The Great Giana Sisters (one of my early favourites, I have to admit), Frogger, Tetris, X-Wing, Super Mario Land (a later favourite of mine) or whatever game they were into before or instead of sleeping. Those sounds are now remixed and new songs are created with the early sound programs. Different approaches are taken, some include other music instruments such as a guitar or a set of drums, others include vocals or dance-beats: the old sound of the nurseries enters stage and dancefloor. Saturday night at the Eyebeam was a sold out night.
Dress code: hoodie, jeans and trainers for the masses and a little costuming for a few extroverts, "nerd chic" presented by a few hipsters who tried to look like Giana or Mario themselves. I was especially struck by a girl with bright red tails and a red xtra large "Nintendo Rehabilitation Center" shirt and a pretty heavy looking japanese underground Grindcore DVD at the merch table that was kind of re-evoking the prejudices I had when I first heard of that kind of music. That night, people were happily bouncing to the tunes of Mark Denardo, Tree Wave, and watched the visuals of No Carrier and other artists that were brought together by The Tank and the 8bitpeoples community.

After about three hours I felt three very urgent needs:

1. to get rid of the second half of the now stale "Brooklyn Weisse" I bought with a little to much enthusiasm upon arrival (man - they should NOT be allowed to call that stuff "Weisse", it tastes like a mixture of wet dog, sugar and vinegar)
2. to sit down, and
3. to FLY HOME TO WITTEN IMMEDIATELY AND PLAY COMMANDER KEEEEEEN!!!!!
Posted by ~SaS~ at 10:51 AM