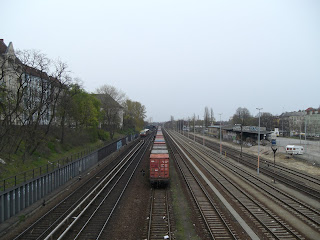 Berlin is a city of distances. Distances you get used to very quickly, because the public transport system is kind of AWESOME over here!

So, let's start this one again. 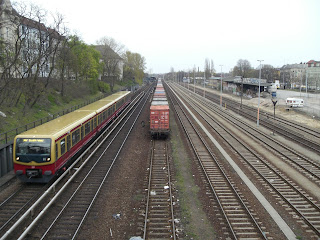 Berlin is a city of public transport. Trains and subways become the second living room for almost everyone (apart from those insane fellows who are actually driving cars inside the city center).

On a train people have breakfirst, lunch, dinner, read books, magazines, newspapers, listen to music, dream away staring out of the windows, write diary, do homework, prepare presentations, teach their dogs and kids things about the dos and don'ts of modern life, cuddle up with their partners on a four-seat, start arguments, sometimes fights, and embrace life to the maximum when the extraordinary polite and friendly driver shouts out loud "With your bike NOT into the first wagon!" ...

On special occasions, like New Year's Eve, you also have people doing a picnic whilst driving the circle line around the city center. Oh, and did I mention all the musicians, poets and homeless-newspaper-sellers, beggars and hobos that are part of this movement? No? Well, here they are.

You can also entertain your friends by having a little quiz-thing going, as you can guess easily which district you are passing through by the people who are getting on and off at the stations. It's like getting to know all the faces of the city in one go.

Just coming from the station tonight, after transiting some southern districts to get home from friends in the far Southwest, I realize that these trains are more than mere means of transportation. They are the veins of the city, some of them are going straight through the heart, others keep the blood flowing and the system moving elsewhere. They most certainly keep the city alive, 24/7.

There are still certain hours during the week where no train is operating. This city sleeps, but no longer than a nice extended nap of about three or four hours, just enough sleep for people who are into extreme yoga or whatsoever. And of course, there is the night-bus-system during that period of time, which is also kind of comfy, but just not quite the same, I must admit.

However, in Berlin, it is perfectly normal to travel great distances to places you wanna go, and to meet people for a coffee at a place about 30 minutes away from home is regarded as close-by. The city is wide, and people get used to spend quite some train-time during the day after they live here for a while. In fact, you kind of miss it once you are staying elsewhere. Oftentimes, you can spot something new from the train, and you can still get to know new parts of the city after some six or so years in town. Things are moving, the cityscape is changing again and again, slow but steadily.

Being on a train can be better than any meditation - IF you travel off-peak, that is. It gets you in a certain train-mood, especially if you are going during the night. A steady flow of images passing your eyes makes it easy to get lost in thoughts and dreams, somewhere between drawing the balance of the present day and making plans for the next one to come tomorrow. It is time that became quite precious to me over the years.

Even if shorter distances would equal more sleep in general, I wouldn't wanna miss floating down these wires ...
Posted by ~SaS~ at 3:31 PM