"You know you are back in Germany for the New Year when ..." 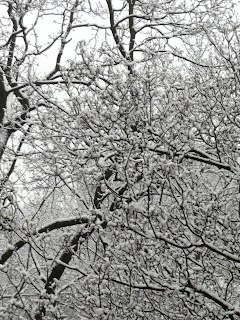 ... you had snow on new year's day.
... you went for a traditional new year's walk in the park with a good friend.
... you included potatoes, veggies and pork in your new year's eve's dinner.
... you went out partying to a goth-club afterwards, and it felt normal.
... you had a kebab at a ridiculous time of the night, and you are part of the masses doing it.
... you went to a supermarket at a train station and bought bread - REAL bread.
... you had a "Spieleabend" the day before - full of magicians and priests and dwarves and elves.
... you saw people walking down the streets with bottles of champaign or sparkling wine or beer - without hiding them in brown paper bags and without trying to hide from the police.
... you saw many green real Christmas trees, instead of pink fake ones.
... you are proud of surviving a day and a night and another day full of explosives without hurting yourself at burning trash cans or mailboxes.
... you slipped on the "Kopfsteinpflaster" of the sidewalk at least twice.
... you already messed up one or two of your new year's resolutions at five past midnight.

großartige Textidee! Good points! Hope the one with the Kopfsteinpflaster was only for the sake of this unique word. Let's make up some more lists like that!