"Brighton Beach: The Story of Lucky Me and the Last Summer's Day (2)" 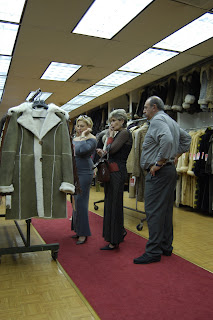 Welcome to the second part of the show.

My guest is still Lucky Me, telling us about that last summer's day she spent in southern Brooklyn with her camera.

Q: Lucky Me, after you covered that market, what happened next?

LM: Well, um, I was in this, like, flow you know, um, so I decided to leave the beach idea for a while and keep shooting. And, actually I went to some shops to ask for permission and surprisingly they were all cool about it. Um, can I say thank you here? maybe they are listening.

Q: Right, back to business. So you went to that store that sells fur coats. How was it?

LM: Well, actually, I was wondering why people already start to buy fur coats, as it was really hot that day. But anyways, I took some pictures and then left again after like five minutes with a spasiba and a smile to head for my next goal.

Q: And what would that be?

LM: A food store. You know, um, like one of these shops in the center of Brighton Beach that sell Russian sausages and stuff like that. There are quite a lot of them, actually. 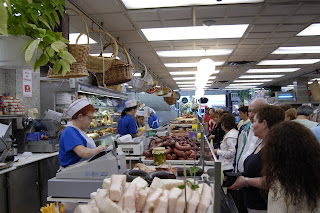 Q: I see. I bet it was pretty crowded in there.

LM: Definitely, there were queues everywhere and the paths were very narrow and also packed with pyramids of stuff and people kept bumping into my while I was trying to keep my camera still. Not an easy one, for sure. But I liked it. I spent like half an hour in there before I finally decided to leave them, too, with a spasiba and a smile and head for the beach.