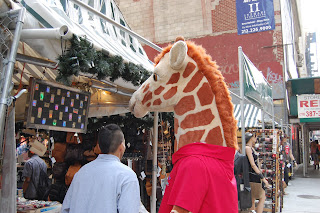 LIKE, WHAT!
:D u made the gal out in PJ laugh, thanks for, like, I needed that, man. Am stuck in bt/Pragmatism + Technological issues. Wish I could've been there w/u gal. Did u use a Diktiergerät?

Hey Sassy, I kept reading your blog and I do think that you are getting into US way of life and irremediatly, the way of speaking too.
Do not forget where you come from and do not forget Shakespeare and our beautiful Coventry... lol.
Anyway, next week France is going to beat England for a rugby game (telling you this as news from Europe hehe) Hope you have fun.
Take it easy and speak to you soon.
(And don't make fun of my English pleaaaase...) Bisous

I wont speak Ameeericcäään Inglish, never. And of COURSE I still know where I come from. Lovely Covcov and Shaxey are still highly appreciated over here. ;o)
I am just "observing The Other" ;o).
THOU ARED HUGGED;
bisous bisous,

@vel: all made up, any similarity with some kind of familiar reality is purely coincidental... ;o). cu soonio