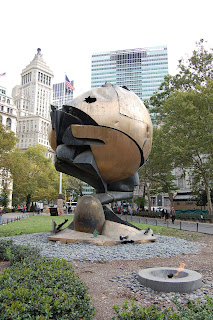 I met Sergej the other day. More than thirty years ago, he came for three weeks from Croatia to New York City and decided to stay. Sergej is doing "Manhattan Comprehensive" now for quite some time: a one-day tour that gives tourists a first impression of what The City is like. It takes you from 48th street downtown via Times Square, across my Village, to the Battery Park to go on a ferry that stops at the Statue of Liberty, later uptown again via Central Park, across Harlem, past the site of the Cathedral Church of St. John the Divine and down Fifth Avenue to a final visit of the Empire State Building.

The tour stops at the World Trade Center site as well; people have lunch close to where the Twin Towers have been. Sergej used to go up the towers with his groups almost every day, until 2001. On 9/11, he and his driver decided to take the tour the other way around, a timing that rescued his life. His memories he shares with the tourists now, always concluding like this:

"Almost everyone knew people working up there, and so did I. You see, it is personal for all of us."

The photo next to this post shows a statue that used to be on top of the WTC, it is part of the Battery Park now. The sanctuary lamp is still burning these days.
Posted by ~SaS~ at 5:52 AM