"The King of Diamonds' Tour through Coney Island (2)"

I met the King of Diamonds for the first time on the beach, he was resting quite a bit too close to the sea, and I was afraid of him getting wet or even washed away by the billows. So I helped him getting up and out of the sand.
A little later, The King of Diamonds caught up with me whilst I was strolling down the boardwalk, again twiddling around with my new favourite toy (the D-40 as some of you might have figured out by now). He was what I would call a pretty casually dressed king (track suit), carrying a scroll of the latest edition of his court news under his arm, in which he had written one of these violent youth crime stories involving (ab-)use of fire arms.

That is what The King of Diamonds usually spends his glory days doing, when he is not walking down there on a sunny Sunday: reporting.
Today he decided to be nice to the Stranger who just entered his realm for one day, and because of that a little rude to his friends he kept stalling on his mobile communication device. That way I got to know yet another story: The Diamond King's story.
A story of painting houses in San Francisco, of sharing rooms with three Others in Brighton Beach, of grandparents coming from Russia, of similarities between the teaching job and journalism, of royal voyages to Continental and Island Europe, of meeting Walther in Hamburg, of working in Dublin's Fair City, of the neat possibilities of chosing between Chinese or Japanese Food at three in the morning in NYC, of cultural misunderstandings of different variations of stadium ball games, of life in general and walking down Brighton Beach to Coney Island in particular. 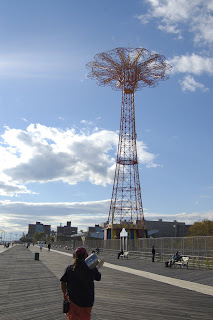 It was built for the 1929 New York World's Fair in Flushing Meadows Park, Queens, and moved to its current site in 1941 to finally cease operation in 1968. Before you suspect me of being too big on dates now, let's move a little further down the boardwalk. 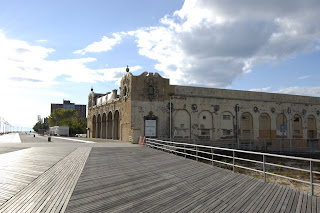 The King of Diamonds told me that this nice little fellow - a now empty landmark - used to be both a bath and a candy factory and I had much fun picturing the latter operating. The King of Diamond seemed to have sensed that, as he bought me a huge candy lollipop in the end of our little tour (yes mum, so much for not taking candy from strange old men ...).
Images of the recent chocolate factory movie came to my mind, I pictured little Charlie walking towards grumpy Johnny Depp, mouth and eyes wide open because of all the magic that happens around him (yes mister critical theory, so much for our own way of thinking being influenced by hegemonic media texts that support the dominant ideology ...). Anyways, keep walking!

You see this tall boy? The King of Diamonds told me another story passing him. Can you spot the seventh floor? From up there an ex-mafia guy was thrown out of the window by a corrupt police officer, as the legend goes.
He wanted to get out of the swamps and into a nice little life in the suburbs of Innocentia, thus he chose to be a witness, a canary singing loudly - I assume he sang a little too loud though. So much for bad luck in gambling with the wrong