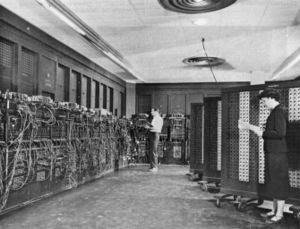 Major wars like WWII influence gender relations and work. Here is an example to prove this I was not aware of until a couple of days ago: ENIAC. Both male and female computers and programmers, engineers and scientists developed America's first electronic computer in a cooperation between the University of Pennsylvania and the US armed forces. Due to the war, there was a lack of male engineers, though women with technical and mathematical knowledge were needed for scientific development - to keep the system going, one could say.

With the feminization of the above professions came a loss of status. Women had practically no opportunity to display their knowledge in public, the praise for the achievements was always addressed to their male colleagues. Men's work was usually regarded as more "important", even though both were equally skilled. I general, the production of hardware was seen as a male profession while programming software was a womens' job. This contradicted reality, as women, in order to do their programming, needed sophisticated knowledeg of and familiarity with the hardware, too, they needed to understand it to work with it.

Women played a key role in major technological developments in that period of time. Nonetheless they were omitted by the big PR machinery, had no opportunities to participate in telling the true "ENIAC story". They were mostly ignored by the public discourse that was significantly shaped by the War Department and the media at that time.
After the war, the Department of Labor tried to get the majority of these women into teaching jobs, which were considered more suitable for them. Nonetheless some never left computer programming. The widely spread assumption that computer pioneers were all male is wrong. It seems as though we have to take a closer look at the stories of all the Wosniaks of this planet.

It is information like this that leads us to the conclusion that other parts of the history of science, in many cases a history of the lonely male genius, need to be revised as well. Eyes open!
Posted by ~SaS~ at 11:50 AM