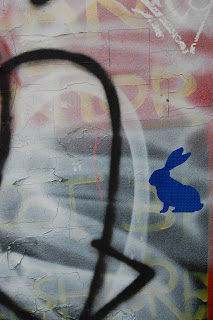 And if you go chasing rabbits, and you know you are going to fall;
Tell 'em a hookah-smoking caterpillar has given you the call;
To call Alice, when she was just small.

When the men on the chessboard get up and tell you where to go;
And you've just had some kind of mushroom,
and your mind is moving low;
Go ask Alice, I think she'll know.

When logic and proportion have fallen sloppy dead;
And the white knight is talking backwards;
And the red queen's off with her head;
Remember what the dormouse said,
Feed your head, feed your head"


"Katholischer Güterbahnhof Sankt Galen, how can I help you to ease your temper?"
"Alice? It's me. How's it going over there?"
"You?! It's been ages ... I am good, actually, pretty good. Just having a nice cuppa coffee with the Cheshire Cat at the Rabbit's Inn next door, he didn't have time to join us of course, but that's just him anyways, I am sure you recall?"
"Sure, I do. So it's still out and about in good ol' Wonderland then, is it?"
"Can't help it, it's too nice over here, especially during the last days of summer, but whom am I to tell."
"Ah, the summer in Wonderland ... Any news from the royal gambling tables then?"
"Not particularly interesting ones. The Red Queen's still trying to ease Humpty Dumpty's pains from his constantly falling off the new fence of the courtyard. Mad Hatter had one of his end-of-season teaparties last weekend, and again he got pretty upset by the Dormouse falling asleep on his lap - you know him, he's been constantly trying to keep that little dude awake again, but no chance, as usual."
"That's what it's like with dormouses, I guess. Some things never change."
"I am sure you wouldn't expect anything else?"
"'Course not, it wouldn't be right, would it?"
"Nope. Hmm.. What else to report to our traveller? Let's see.. The Dutchess came up with some pretty good new caporal she developed with the Caterpillar. A little too dark for my nose though, but for the others it's like all the rage this year. Apart from that? Well.. Little Mock Turtle is still high on stories from his days in the school in the sea - I wonder whether he'll ever get over the fact that he didn't get straight As in tailwater ballet. All being upset about this old stuff. Lory drives me even more crazy though, big on repeating that turtle's torture these days."
"Must be quite a pain in the neck, I suppose."
"I guess I'll get used to it eventually."
"You will, and if not - just put that turtle into the fridge for the winter and little Lory will learn another tune soon."
"Haha, damn right you are on that one. Never undersestimate the powers of a neat fridge."
"Never."
"Anyways, how's you? Any plans on coming over for another visit or two?"
"Yeah, just a couple of things to sort out over here, but I should be coming over in like a month or two."
"Sounds like a plan to me, mate. Right, gotta go now, this kitten of ours gets a little too fidgety. Let me know when you'll arrive and 'til then: Keep your chin up as high as you can, mate."
"Alright, Alice, see ya'."